The Need for Water

The Prescott Active Management Area (AMA) has a long history of agricultural water use. Prescott is the first territorial capital of Arizona and the first settlement established by the United States, but it was located a long way from established agricultural regions. With food products at a premium, the early settlers took advantage of the various surface water sources to irrigate crops. In the early 1900’s, additional water supplies were developed by building reservoirs such as Watson, Willow and Goldwater Lakes to contain water for dry periods. By the late 1930’s, the invention of the turbine pump produced enough water to make pumping groundwater for irrigation viable. Within about fifteen year, more water was being pumped out of the Prescott AMA than was being replenished – a condition known as groundwater mining.

By the mid 1990’s water use for municipal purposes surpassed agricultural uses for the first time. Due to water management program created by the 1980 Groundwater Management Act (Act) overall water use has not increased over the past 50 years. However, the Act also requires that water users in the Prescott AMA reduce their net groundwater pumping to a level where groundwater mining is eliminated by the year 2025. This stable condition where no more groundwater is pumped than is being replenished is known as Safe Yield.

When the Act and the Safe Yield goal were being considered, Arizona’s leaders planned to uses water imported by Central Arizona Project (CAP) Canal to replace the overuse of groundwater, allowing the various AMAs to reach Safe Yield. Although the CAP canal now provides 1.5 million acre-feet of Colorado River water to Phoenix and Tucson, the CAP was never extended to provide water to the Prescott AMA.

As a result, the Prescott AMA finds itself in a position of having a legislative goal of reaching Safe Yield without same benefits of a large public water project that the other AMAs enjoy. Although the Act has imposed strict rules on water management and water conservation in the Prescott AMA, including placing a moratorium on subdivision growth using groundwater, these provisions alone will not allow the Prescott AMA to reach Safe Yield. The Arizona Department of Water Resources (ADWR) recognized that the Prescott AMA will need additional water supplies to reach Safe Yield in its Management Plans. At this time, the only legally available source of water for the Prescott AMA is the Big Chino Sub-basin as defined in Arizona Revised Statutes section 45-555.

The idea of importing additional water goes back to the 1920’s with the inception of the Central Arizona Project (CAP) as a way to increase population growth in Arizona. The CAP, like most water projects, took nearly half of a century to get through legal and administrative hurdles before construction was underway. By the early 1980’s the Arizona Department of Water Resources had allocated water rights to various communities in Arizona, including the City of Prescott (Prescott) and the Yavapai Prescott Indian Tribe (Tribe). The CAP never intended to build a pipeline to deliver its water directly to Prescott and the Tribe, rather the plan was for Prescott to draw their water directly out of the Verde River and exchange its CAP allocation to a downstream user of Verde River water who was also a CAP customer. As environmental compliance laws became more stringent in the late 1980’s it became impractical for Prescott to take a direct diversion from the Verde River to fulfill their CAP allocation. Instead, a number of events in the early 1990’s allowed Prescott to exchange a direct diversion of water from the Verde River water for groundwater rights in the Big Chino Sub-basin.

With these elements in place, Prescott planned to move forward on a pipeline to bring groundwater from the Dugan Ranch near Paulden and into Prescott in the late 1990’s. Verde Valley residents raised concern about possible impacts to the Upper Verde River Springs (UVS) from pumping groundwater from about 4 miles away. After much debate and public input, Prescott purchased a water ranch (the Big Chino Water Ranch or BCWR) much further away from the UVS and on the other side of an underground hydrologic restriction or barrier commonly called the Clay Plug. Pumping water an additional 16 miles and purchasing another ranch property substantially increased the cost of importing water so in 2004 Prescott brought the Town of Prescott Valley into the project as a 46% cost share partner in exchange for 46% of the water.

In 2008 Prescott and applied for a re-designation of its assured water supply determination from ADWR including the addition of the Big Chino Water Ranch supplies. This process opened the door for public objection and a number of lawsuits and administrative hearings were launched to prevent Prescott from importing water from the BCWR. This effort was led by the Salt River Project, the largest raw water provider for the Phoenix area and a senior user of Verde River water.

In 2010, Prescott, Prescott Valley and Salt River Project settled these various lawsuits out of court. The 2010 settlement between the three parties resulted in unwinding the on-going litigation, modifying ARS 45-555 to limit the amount of water Prescott could transport from the Big Chino to 8.068 acre-feet per year and a number of other general stipulations including an agreement that pumping by Prescott and Prescott Valley would not harm the UVS. This Agreement in Principle led to a subsequent agreement to increase the hydrologic monitoring network in the Big Chino Sub-basin and to construct a detailed groundwater model to determine how to best manage groundwater withdrawals so that no harm is done to the UVS. Currently Prescott, Prescott Valley and SRP are focused on the monitoring and modelling efforts that will lead to a mitigation plan to ensure that future pumping does not harm the UVS. 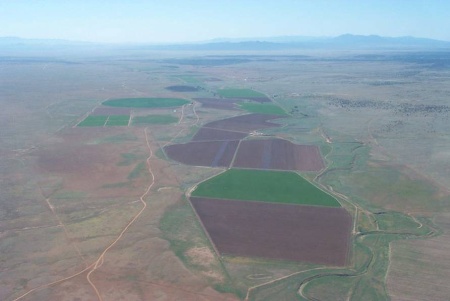 The US Geologic Survey estimates that about 80% of the outflow from the Upper Verde Springs is supplied by groundwater from the Big Chino Sub-basin. This statistic has alarmed a number of special interest groups that proclaim that pumping any amount of groundwater from the Big Chino Sub-basin will ultimately result in harming the UVS. This public alarm and outcry led to Prescott and Prescott Valley purchasing the BCWR about 20 miles away from the UVS. It is important to understand that the Big Chino Sub-basin is not like a simple bathtub where any water removed from the tub results in less water going out of the drain. The fact is, the Big Chino Sub-basin is larger than Rhode Island, has at least two groundwater outlets (or drains) and not all sources of the groundwater is interconnected and a source of water for the UVS. The complexity of large natural systems is difficult to model, and those models depend on historic evidence and many assumptions. Historic evidence indicates that pumping groundwater from the Big Chino Water Ranch won’t impact the UVS due to the simple fact that groundwater has been pumped and consumed by agriculture at this location for 80 years without impacting the UVS or lowering the water table at the Ranch property. The water table at the Ranch is within about 20 to 50 feet of the surface and extends to a depth of about 2,500 feet. The Big Chino Water Ranch has approximately 3,600 acre-feet of water rights based on this historic use that were retired by Prescott. The net increase in pumping from the aquifer would be 4,468 acre-feet if the total allocation of 8,068 acre-feet were to be imported. The Big Chino Sub-basin is estimated to contain 15,000,000 acre-feet of water. The ultimate purpose of the monitoring and groundwater modelling project is to better define long-term impacts from this increase in pumping and to develop a mitigation plan to prevent impact to the UVS. The mitigation tools could include purchasing and retiring other irrigation water rights, watershed management (reducing dense woody vegetation and increasing recharge), reducing pumping or modifying pumping schedules and rainwater harvesting and recharge techniques.

The Big Chino Water Ranch project will be the most costly public infrastructure project built by Prescott and Prescott Valley. The costs for Prescott Valley will be borne by new subdivisions that are prohibited from using local Prescott AMA groundwater. But if the water is being used for growth, how can it possibly be used to reach Safe Yield? The answer lies in the recyclable nature of water. Big Chino Water supplied to new growth produces effluent from the wastewater treatment process. Prescott Valley homes and businesses currently return about 65% of the water delivered to them to the wastewater treatment plan. Many Arizona communities including Prescott Valley safely recharge treated wastewater, called effluent or reclaimed water, to the groundwater system through carefully regulated State programs. This once-used water safely recharged to the aquifer, allows the Prescott AMA to reach Safe Yield.