All cities in Arizona are required to have a balanced budget where spending cannot exceed available revenues.  State law requires that cities in Arizona cap their annual expenditures either by adhering to a limit determined by a formula developed by the State in 1980, or by obtaining voter approval on an alternative expenditure limitation.  The State’s formula does not take into consideration the level of services and programs provided to citizens by each city or town. As an alternative to this formula-based limit, the State Constitution allows voters of a municipality to approve a Local Alternative Expenditure Limitation, otherwise known as the Home Rule option. The Home Rule option allows the Town Council to adopt its own budget limits locally based on local needs, service levels, and available resources.

I Haven’t heard about this before - When did this process begin?

Since this comes before the voters every four years, there are two public hearings held to inform citizens of the issue.  Public hearings were held at the Council meetings on March 12, 2020 and March 26, 2020.  Following the second public hearing, the Prescott Valley Council approved Resolution No. 2129, which allows for the submission to the voters the question of whether or not to extend Home Rule.

When will this be voted on?

The primary election was held on Tuesday, August 4, 2020. A “YES” vote on Home Rule would allow Prescott Valley to continue to set its own budget spending limits locally via the budget adoption process. A "NO” vote would limit the Town expenditures to the State-imposed formula limit, resulting in a reduction of Town services. Home Rule will be considered again in 2024.

Has the Home Rule Option been approved in the past?

What if the Home Rule does not pass this time?

If voters do not renew Home Rule, Prescott Valley will be required to begin operating under the state-imposed expenditure limitation, regardless of the actual revenue it is collecting.  The Town would have to wait a minimum of two years before it could ask for another vote to consider Home Rule.

Will my vote have any impact on taxes that I pay?

No, this vote has nothing to do with the sales tax rate or property tax.

How do the State-imposed limitations compare to the Town’s Home Rule budget estimates? 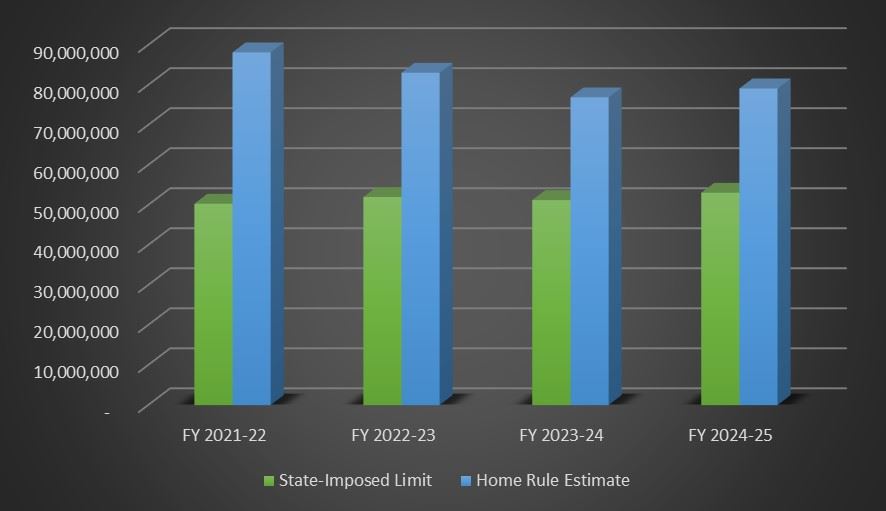 The State-imposed limitations would result in a budget shortfall for Fiscal Year 2021-22 of approximately $38,000,000, or 43%.  A decrease of this magnitude would significantly impact both the type and level of the services provided by the Town.

Where is there more information on the Home Rule Option?